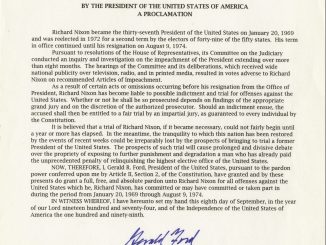 The pardon power granted to the president under Article II, § 2 of the U.S. Constitution is intentionally broad. While the president has no power to pardon violations of state law, the president has apparent plenary authority “to grant reprieves and pardons for offenses against the United States, except in cases of impeachment.” Until recently, it had never occurred to anyone that the president’s power to issue pardons might extend to pardoning him or herself. While there are arguments against such a reading of the Constitution, the plain language does not forbid it. Is a constitutional amendment required to clarify that the pardon power does not include self-pardons? Should the exclusion also include the president’s family or people who have […]