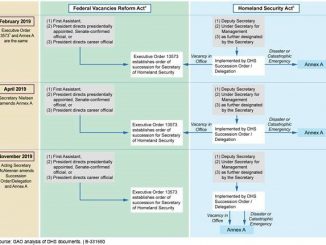 The current Vacancies Act, passed in 1998, is the latest iteration in an ongoing-struggle to balance the need for efficiency and continuity with the requirement that the Senate approve presidential appointments found in Article 2, § 2 of the U.S. Constitution. The statutory scheme is confusing, in that there is often more than one method by which a vacancy can be filled. It also allows the president to staff key positions for up to 17 months at a time with “acting heads” who have never been senatorially confirmed in their positions. If a president is willing to openly game the system, he can make do with unconfirmed executive officers for years. Should the Vacancies Act be reformed both to rationalize […]